A new report makes the case that the tailings dam for what would be the biggest open-pit mining project in Latin America falls short of regulatory requirements and has an “unacceptably high” risk of failing, posing a serious threat to the environment and Indigenous communities.

The project, in the Volta Grande do Xingu region of Brazil’s Pará state, is being developed by Canadian mining company Belo Sun, with the tailings dam being built by the same companies behind two similar dams that failed catastrophically in the past five years. Belo Sun’s gold mine is already the subject of a slew of legal inquiries by Brazilian federal and state authorities, the details of which form part of the analysis of the new report.

Commissioned by the Indigenous and environmental coalition Rede Xingu+ (Xingu+ Network) and written by Steven H. Emerman, a geophysicist and mining specialist, the report identifies a series of flaws in the environmental impact studies that Belo Sun has presented so far and recommends that the authorities reject the project outright.

The proposed tailings dam would be similar in size to the Vale/BHP dam that ruptured in Mariana, Minas Gerais state, in 2015 and became the biggest environmental crime in Brazilian history. Emerman’s report says that at least 9 million cubic meters (317 million cubic feet) of toxic waste from the dam would cover 41 kilometers (25 miles) of  reach the Xingu River in the most likely dam failure scenario. This waste would contain highly toxic metals, such as cyanide, arsenic and mercury. In January 2019, another Vale dam collapsed in Brumadinho, also in Minas Gerais, killing more than 250 people. Construction of the Belo Sun tailings dam will involve the same companies, VogBR and Brandt Meio Ambiente, that worked with Vale in Mariana and Brumadinho.

Emerman also says there were no seismic safety criteria used in the design of the tailings dam, violating Brazilian regulations on such dams, which must be designed to withstand events such as floods and earthquakes.

Belo Sun did not include an analysis of the local seismicity in its studies — another violation of Brazilian regulations — nor did it simulate the structural response to a hypothetical seismic acceleration.

“It is reckless to move forward with the project in this way, with this amount of information missing,” says Biviany Rojas, a lawyer at the Socioenvironmental Institute (ISA), a nonprofit that advocates for environmental and social rights.

Asked to respond, Belo Sun said that “the licensing of the Volta Grande Project follows all pertinent rites and the company is always available to communities, entities, and bodies involved in the licensing process and reinforces its commitment to the Volta Grande do Xingu region, respecting Brazilian legislation at the federal, state, and municipal levels.”

Rede Xingu+ has forwarded Emerman’s report to the relevant authorities. It points out the series of flaws in the environmental impact studies that Belo Sun has presented so far and asks that the multinational be denied authorization to proceed.

Belo Sun’s area of interest for its proposed gold mine. Image courtesy of Amazon Watch.

The company’s installation permit, one of the prerequisites for obtaining an operating license, was suspended by a court last November over non-compliance with the licensing requirements. Emerman, however, says the project should be totally scrapped.

Mongabay previously reported on how Belo Sun was moving forward with its plans despite all the lawsuits it faces for not complying with requirements related to affected Indigenous communities around its project site.

Belo Sun’s mining applications cover lands that lie inside the Arara da Volta Grande do Xingu and Trincheira Bacajá Indigenous territories. But its proposal in 2012 omitted any mention of the Indigenous populations who would be affected. “There is no mention because there are no indigenous communities in the region,” said Hélio Diniz, vice president of exploration at Belo Sun at the time.

That’s because FUNAI, the federal agency in charge of Indigenous affairs, had defined the impact zone of a project as being within a 10-km (6-mi) radius. But that rule is trumped by both the Brazilian Constitution and the International Labour Organization’s Convention 169, which Brazil has ratified. Both call for Indigenous communities to be consulted on projects that may affect them. It took legal action from the relevant authorities to get Belo Sun to listen to the affected Indigenous communities, and in February this year the company finally submitted its Indigenous component study (ECI) as part of the licensing process.

But the ECI was incomplete. The Juruna people, who have their own protocol for consultation, say they were not consulted correctly and that the mining company left many questions unanswered. FUNAI is responsible for analyzing Belo Sun’s ECI and requesting any additions and corrections.

The Juruna, who live in the Paquiçamba Indigenous Territory, say they will not accept any project that will push them away from the Xingu River or make it impossible for them to stay on the river. “We know that we have the right to be consulted, to defend our land and traditions, to fight for decent living conditions, and to choose our development priorities. Neither the government nor any company can deny these rights,” they say. 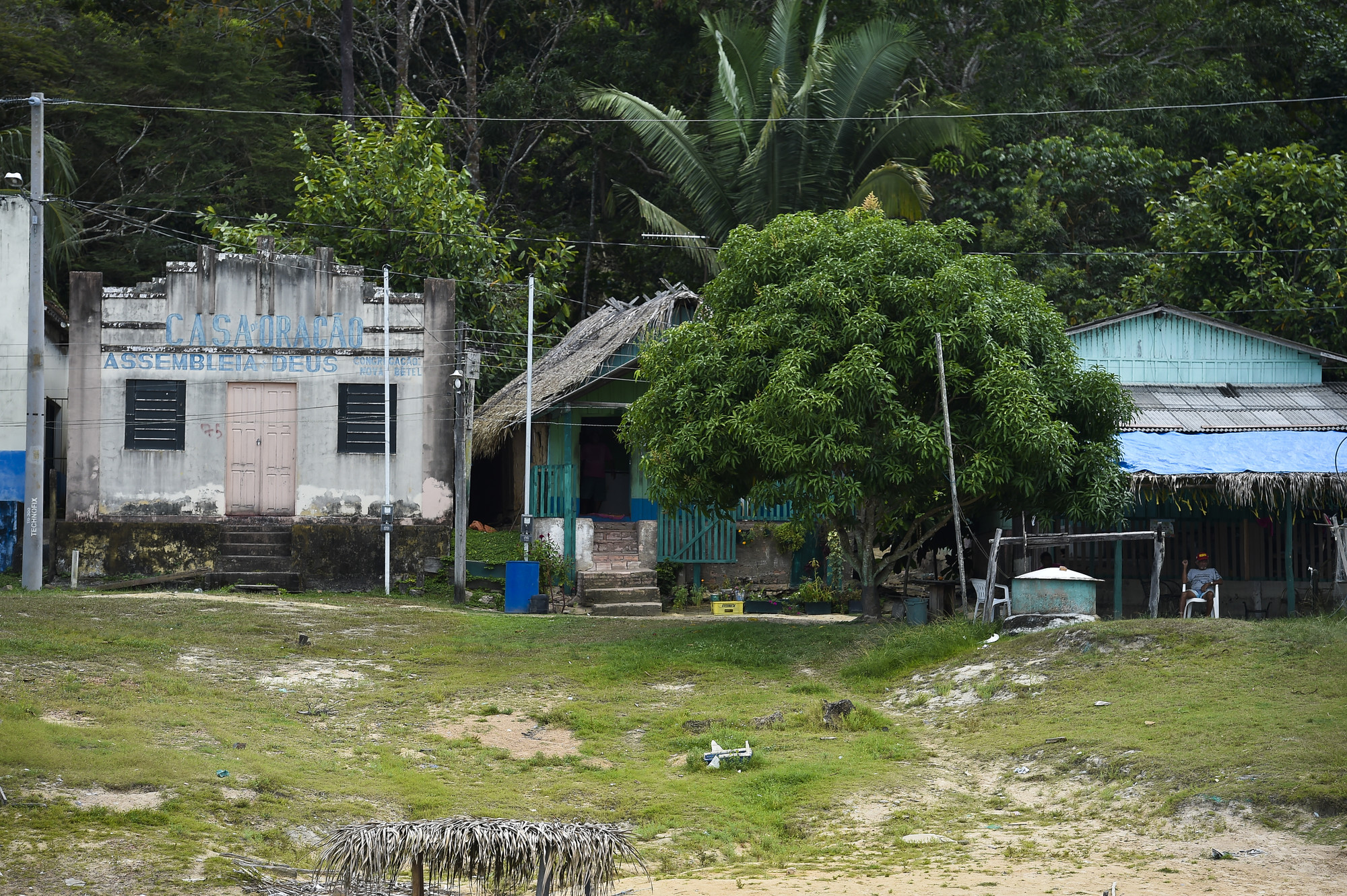 A community on the island of Fazenda, one of those affected by Belo Sun’s activities. Image by Marcelo Soubhia/ISA.

A group of 100 riverine families, who would also be affected by the Volta Grande project, were not sought for consultation by Belo Sun. Nor were the Arara Indigenous people, who are in the process of defining their own protocol. There are reports that Belo Sun has paid local leaders salaries to try to influence the community’s decision-making process.

Belo Sun said it was up to FUNAI to verify the ECI. Upon the company submitting it in February, FUNAI then “followed the entity-established protocols, including collecting primary data, and consulting indigenous communities,” Belo Sun said. “ECI is a private government matter with communities.”

The company did not respond to questions about Emerman’s findings, the cumulative impacts of the project, the lack of consultation with the Arara people and the riverside communities, or the allegations it was trying to buy off community leaders.

Use of explosivesThe Volta Grande project is expected to yield 74 tons of gold over the course of 20 years, one of the largest operations of its kind in Latin America. But the area of the Amazon where this vast open-pit mine would be dug is one of the richest on Earth in terms of biodiversity.

The project site is just 10 km from the Belo Monte hydropower dam on the Xingu River. During its construction, crews used explosives that could be heard and felt by communities living in the area.

More explosives are planned for use in the gold mine if that project is approved. In addition to the environmental destruction, the noise pollution could take a toll on the mental health of nearby communities and the structure of their homes. The explosions would also pose another risk factor for the proposed tailings dam that still doesn’t have a seismic analysis.

“They all have a fresh memory of the Belo Monte [hydropower dam]. They are traumatized regarding the opportunity to be properly heard and are concerned about the systemic impacts generated by the explosions,” says Rojas, the lawyer.

In October 2019, the Federal Prosecutor’s Office (MPF) recommended the Pará state government suspend all licenses in Volta Grande do Xingu due to the impacts of the hydropower dam. It said no projects should be allowed to proceed there pending the conclusion of tests on the ecological impact of the dam, which could last six years.

Belo Sun, listed on the Toronto Stock Exchange, is part of the Canadian group Forbes & Manhattan Inc., a privately held company with extractives projects around the world, including gold in Africa, ferrous metals in Ukraine, and copper, oil and gas in North America. In Brazil, in addition to Belo Sun, it has a shale gas operation in the country’s south and a potash project in Amazonas state.

That latter project has also been dogged by irregularities and lack of consultation with Indigenous peoples, Mongabay previously reported. The mining company, Potássio do Brasil, was discovered drilling inside the Jauary Indigenous Territory, home to the Mura people, and in areas adjacent to other Indigenous reserves before obtaining permission to do so. The areas as a whole are vital to the livelihood of the communities, who also risk seeing their groundwater contaminated with mining waste.

Banner image of a gold mine in the Kayapó Indigenous Territory in Pará state, by Felipe Werneck/IBAMA.

This story was first published by Observatório da Mineração here on June 17, 2020.

You may republish this article, so long as you credit the authors and Mongabay, and do not change the text. Please include a link back to the original article.