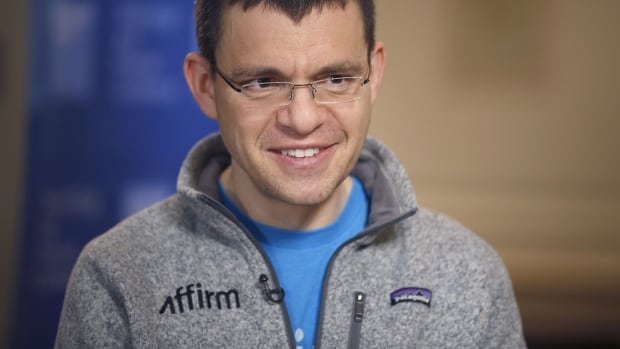 Max Levchin is the CEO of payment firm Affirm, which is about to have its IPO. Ottawa-based Shopify is poised to make up to $500 million in the offering, due to its tiny stake in the San Francisco company. (Tony Avelar/Bloomberg)

Canada’s most valuable company could be about to get even more valuable, thanks to its tiny stake in a technology firm about to go public on the stock exchange.

Ottawa’s Shopify has the option to buy 20,297,595 shares in Affirm, a San Francisco-based company that let’s people pay for goods and services by instalment, instead of the fees and interest rates associated with credit cards. Affirm filed paperwork this week for an initial public offering that could value the company at up to $10 billion US.

Part of that paperwork revealed that in July, Shopify was given warrants to buy shares in the company for a penny apiece.

Affirm granted Shopify those warrants in exchange for giving the San Francisco company access to the network of U.S. retailers that sell things via Shopify’s system. “By partnering with Shopify, the gold standard of commerce platforms for businesses that want to sell direct-to-consumers, we can help merchants seamlessly enable a pay-over-time option at checkout,” Affirm’s CEO Max Levchin said this summer. “In doing so, we’re helping them reach new customers, particularly Gen Z and Millennials, who are looking for more transparent and flexible ways to pay.”

IPO paperwork shows Affirm has only a few thousand retail partners right now, and more than a quarter of the company’s revenue comes from fitness app Peloton, a seller of high-end exercise equipment and classes. More than a million businesses use Shopify, and more than 60 million customers have used Shopify’s payment service, Shop Pay, to buy something online.

It’s not known how many of those warrants Shopify will cash in. If it exercised its right to buy all of them it would cost just over $200,000, and give Shopify a five per cent stake in the company. That’s $500 million US — at the high end — of the $10 billion valuation Affirm has been targeted at.

That would be a nice bump to Shopify’s coffers, which were full to begin with thanks to booming demand for online businesses such as theirs during the pandemic. Shopify shares were changing hands at $1,277 apiece on the TSX on Friday, which values the company at $155 billion, enough to make it the most valuable one in Canada, a title it took from Royal Bank earlier in the pandemic.