As a Canadian, there’s nothing better than when my country beats the U.S. in something, whether it’s hockey, tiddlywinks, or Bitcoin (CCC:BTC-USD). 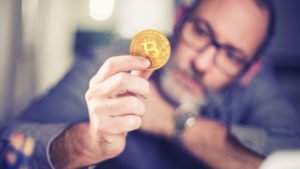 So, despite being a bit of an old-school type when it comes to cryptocurrencies, the fact that Som Seif-led Purpose Investments was able to bring out the first North American Bitcoin exchange-traded fund on Feb. 19 is cause for celebration.

The only problem for retail investors is that Purpose Bitcoin ETF trades on the Toronto Stock Exchange. It’s not available on a U.S.-listed exchange. It’s not even available over-the-counter to the best of my knowledge, but that could change given its first-day volume.

Americans have been begging for an easy-to-buy Bitcoin ETF that isn’t a derivative but rather holds the actual cryptocurrency. Having just gone over $50,000, that request is going to get louder by the day.

So, let’s assume for a second that Purpose Investments’ Bitcoin ETF does trade on a U.S. stock exchange. Should you buy it? Or, should you buy the actual coins through Coinbase or some other cryptocurrency platform?

Well, that depends on why you’re buying in the first place.

BNN Bloomberg recently posted a poll on Twitter (NYSE:TWTR) that asked the question: “Would you be more likely to invest in bitcoin through an ETF?”

I answered more likely. In fact, 61.5% of the 1,023 respondents say they are more likely to invest in Bitcoin through an ETF. Only 9.2% said they’d be less likely. Not surprisingly, 29.3% said they would never touch Bitcoin.

An ETF gives Bitcoin street cred with the regular folk.

“There’s sizable untapped interest for a Bitcoin investment that has the benefits of an ETF,” Todd Rosenbluth, CFRA Research’s director of ETF research, told BNN Bloomberg, adding it’s unlikely the fund will trade at a significant premium-to-net-asset-value. “While most ETFs come to market globally with an educational hurdle to overcome, many investors are familiar with what is inside BTCC.”

That’s why so many are pushing for the same thing in the U.S. Several companies, including VanEck Associates, have regulatory filings with the Securities and Exchange Commission (SEC). Still, the agency is moving deliberately, given the volatility.

Well, while the SEC is twiddling its thumbs, Evolve Funds got approved on Feb. 16 to be the second Canadian ETF to own Bitcoin directly.

“The Evolve Fund’s investment objective is to provide holders of Units with exposure to the daily price movements of the U.S. dollar price of bitcoin while experiencing minimal tracking error by utilizing the benefits of the creation and redemption processes,” the Bitcoin ETF’s prospectus states.

The downside: You have to pay a 1% management fee. That’s not a bad price to pay for a no-muss-no-fuss investment.

The last time I wrote about Bitcoin was in late January.

At the time, I wondered if Grayscale Bitcoin Trust (OTCMKTS:GBTC) was the best way to own the cryptocurrency. I concluded that it probably made sense to own Bitcoin directly because of the 2% management fee.

“Still early days, in the cryptocurrency wars, if you must own bitcoin, I would seek to do so through Coinbase or one of the other legitimate cryptocurrency exchanges,” I wrote on Jan. 26.

However, as I said early, deciding whether to hold directly or indirectly through an ETF depends on your reason for buying.

InvestorPlace’s Lou Carlozo wrote an excellent piece about Bitcoin recently that puts direct ownership of the cryptocurrency center stage. If you’re on the fence, I recommend you read it.

The line that sticks out for me is contained within Carlozo’s four foundational principles for owning Bitcoin.

“As long as we have a pandemic on our hands, investors worldwide will treat Bitcoin as a place to store wealth. That also baffles me — the volatile becomes the secure! — but nonetheless we see it happening,” Carlozo wrote on Feb. 19.

A place to store wealth. Five words that explain why someone would hold Bitcoin directly.

In the past, Warren Buffett has compared Bitcoin to gold. And not in a good way.

“If you go back to the time of Christ, and you look at how many hours we had to give up in order to buy an ounce of gold and you bring it forward to now, you’ll find the compound rate may be a tenth or two-tenths of 1 percent, … but it doesn’t produce anything,” Buffett told CNBC in May 2018.

“The asset itself is creating nothing,” Buffett also said. “When you’re buying nonproductive assets, all you’re counting on is the next person is going to pay you more because they’re even more excited about another next person coming along.”

However, if you are one of the people buying Bitcoin to store your wealth, comfortable because the number of Bitcoins is limited to 21 million, volatility is immaterial.

On the other hand, if you’re buying Bitcoin to park some cash, buying the cryptocurrency is a huge mistake. The market timing alone will erode your capital.

There was an old saying back when mutual funds were the only game in town that if you wanted to get rich, you bought shares in a growing mutual fund manager and not the shares of the manager’s mutual funds.

Som Seif and Purpose Investments are innovators when it comes to financial services. But remember that it’s rare for something to be solely for the benefit of the customer.

There’s a business case for creating North America’s first Bitcoin ETF. Keep that in mind when you’re deciding whether to own Bitcoin directly or through a third party.

On the date of publication, Will Ashworth did not have (either directly or indirectly) any positions in the securities mentioned in this article.

Will Ashworth has written about investments full-time since 2008. Publications where he’s appeared include InvestorPlace, The Motley Fool Canada, Investopedia, Kiplinger, and several others in both the U.S. and Canada. He particularly enjoys creating model portfolios that stand the test of time. He lives in Halifax, Nova Scotia. At the time of this writing Will Ashworth did not hold a position in any of the aforementioned securities.